A strong gust of wind sent ripples across the surface of Lake Vembanad. Spread across three districts, it was Kerala’s largest lake and the longest in the country. We were at its widest point, Kumarakom, where the lake measured 6km across. There was a steady stream of boats down the National Waterway (the aquatic version of a highway). As we squinted into the distance to see its far shore, it seemed as vast as the sea and we wondered why it was tagged as a lake!

Kumarakom owed its existence to Henry Baker, a missionary from Essex who came here in 1818. His son, Alfred George Baker bought 500 acres from the Maharaja of Travancore, reclaimed the backwaters, developed canals and cultivated a coconut farm. Ingenious dykes prevented seawater from flowing in, which led to paddy cultivation on the reclaimed land. Fed by lakes and rivers, this riverine nook of Kuttanad transformed into the Rice Bowl of Kerala.

In the following years, Baker’s 130-year-old colonial bungalow was assimilated into the Kerala Agriculture University and Taj Kumarakom Resort and Spa. The luxurious villas and heritage rooms overlook lotus pools, gardens and a lagoon, blending Kerala style with Edwardian and modern décor. Baker’s rubber plantation was converted into Kumarakom Bird Sanctuary, a habitat for aquatic birds and fruit bats. But it was the convalescence of PM Atal Bihari Vajpayee and his ‘Musings from Kumarakom’ that drew the attention of domestic travelers to its therapeutic charms.

We were staying at Niraamaya Retreats Backwaters and Beyond, a swank new wellness retreat that afforded the longest lakefront view from its 27 villas – some by the water front, some with private pools on the ground floor and others on the first floor with panoramic waterscapes to gaze at. The rooms were named after local rivers and birds. Our perch, named after the river Chalakudy, presented a stunning view of the sunset from a wide Kerala-style balcony.

Hailing from the legacy of Surya Samudra in Kovalam and Cardamom Club in Thekkady, the resort was a real spot of luxury. After the lighting of the lamp by HH Shweta Rathore of Ranbanka Palace Jodhpur, CEO Manu Rishi Guptha elaborated on Niraamaya’s vision as we experienced their holistic healing with mindfulness coach Dr Shahir and yoga classes by Lalitha Damodaran.

With a golden sunset on Lake Vembanad as a backdrop, we watched Bengaluru band Chronic Blues Circus perform at the official launch. Seeing Mukut Chakravarti, the resort’s GM for Sales & Marketing double up as a keyboard player who put the swing into the evening took us completely by surprise.

The next morning, after an early breakfast at the restaurant decorated with vibrant theyyam (ritualistic folk dance of North Kerala) masks, we set off to explore Kumarakom Bird Sanctuary, the largest heronry in Kerala. A 2km trail over culverts and overgrown roots led past trees laden with giant fruit bats.

Two watchtowers rose above a 5-acre swamp in the core of the sanctuary that was the breeding site for Darters and Black headed Ibis. Apart from all four cormorant species, Kumarakom harbours 88 avian species, including White-breasted Waterhen, Purple Heron, Night Heron and Marsh Harrier. 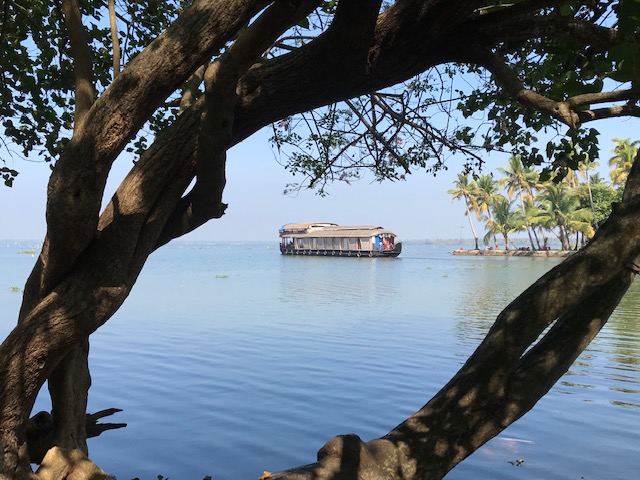 We lounged in the garden benches set in a clearing, watching a houseboat dock across the bird sanctuary at Coconut Lagoon, CGH Earth’s resort. Tharavad homes (heritage bungalows) had been transplanted in a 22-acre coconut plantation fringed by an 8-acre paddy farm. Guests enjoy an elaborate Kuttanad style curry meal on banana leaf with mashed kappa (tapioca), fish curry, fish fry and duck, besides Ayurvedic rejuvenation based on ancient marma techniques and luxurious Spice Coast Cruises.

Just across the lake, but invisible to the naked eye, was Purity by Vembanad, the new boutique hotel run by Malabar Escapes. Winner of the World Luxury Hotel Awards in 2017, this Relais & Chateaux property won the best designed hotel in Outlook Traveller’s Boutique Hotel Awards 2018. Strewn with contemporary art, it offered wellness treatments at its Purespa Ayurveda and boat tours aboard Discovery, their stylized solar-powered houseboat complete with sundecks! 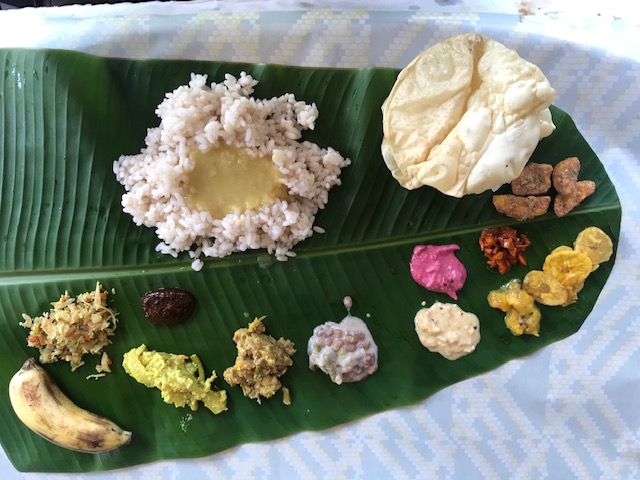 We headed back to Niraamaya for a relaxing massage and Kerala sadya (veg meal usually served during Onam) on banana leaf, before heading out on a boat cruise around Vembanad Lake. A tightly bunched squadron of neer kaka (literally ‘water crows’) or cormorants flew low above the water’s surface like fighter jets avoiding detection by radar. Pond herons hopped between clumps of hyacinth, which bobbed and drifted with the current.

Vembanad is a fabulous eco-system. During monsoons, as water levels rise, the locks of Thaneermukkam Bund (literally ‘mouth of the water’) are opened to regulate the water level, making the lake saline. But the roots of mangrove trees absorb the salinity, making the water fresh again.

We crossed the private MRF Villa – there was indeed a lot of rubber from the plantations available locally and the embankment was lined with strips of old tyres. The boatman pointed out a lush stretch of paddy fields called 900-acres and R-Block, a 3000-acre patch lower than the sea level. It was once owned by the Marickans, hailed as the Kings of the Backwaters who named it after one of their daughters, Rani. 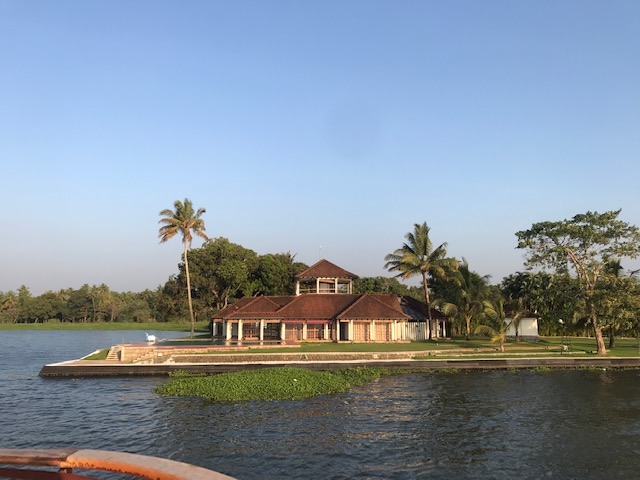 It was the same uncanny Malayali sense of enterprise that transformed war canoes into chundan vallams (snake boats) for races and humble rice boats or grain barges into plush kettu vallams (house boats). Rest and recreation in these parts was not new. The King of Kochi traditionally made an overnight halt at Pathiramanal or Island of Midnight Sand on his journey to south Kerala.

The 19.6-hectare island supposedly surfaced from the lake after an earthquake, though locals say it was formed when a devout Brahmin Sri Narayan Gurudev, dived in to perform his ritual evening bath and the waters of the Vembanad magically parted. A paved path led to the far end of the island and by evening Pathiramanal became the feeding-ground for birds from Kumarakom sanctuary nearby. The sun dipped over the waters, turning it into liquid gold and the sounds of a flute from a passing houseboat caught the wind…

Getting there
Fly to Nedumbassery airport at Kochi and drive 100km (1hr 30 min) to Kumarakom. Cabs can be hired from Alappuzha or Cochin from Travel Cart Ph 0484 2669933/44 www.travelcartindia.com

Getting around
Boats ply on Lake Vembanad from the jetty at Muhamma or Kavanatinkara boat landing, 10 km from Kottayam. Spice Coast Tours operate houseboats from the private jetty at Puthenangad, 45 km from Kochi. Choose from short 2-hr Kettuvallam Cruise, Sunset Cruise, 6-hour Day Cruise that includes on-board lunch and evening snacks/tea or Overnight Cruise with full board.

When to Go
The main tourist season is from October to March, though the monsoon months of June-August offer quiet romantic holidays. 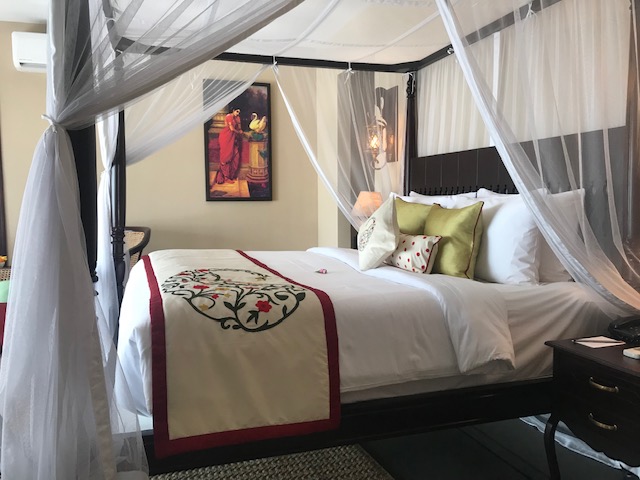 Authors: Anurag Mallick & Priya Ganapathy. This article appeared in the April 2019 issue of Travel 360, the in-flight magazine of Air Asia.

Mubarak ho duniya walon, aap chacha/mama/mausi/uncle/aunty ban gaye. The red whiskered bulbuls made a nest in our Dragon tree (Dracaena Marginata) and after feeding the fledglings, the young ‘uns have taken flight... after perching on our firebush tree, today, these two fur balls landed right in our succulent pot in the balcony. The parents are in a feeding tizzy as both have a voracious appetite. But boy, are they cute?! It’s literally the start of a new era. Happy Ugadi!
Are you ready for some Sugar Rush? As part of our Sunday Herald food column Salt & Spice for @deccanherald, this time we talk about White Gold! It’s a bitter sweet journey from India to Mauritius and lands beyond... Here’s the link: https://www.deccanherald.com/sunday-herald/sunday-herald-melange/sugar-rush-972302.html Enjoy!
The fourth edition of Godrej Food Trends Report for 2021 is out! Curated by @rushinamg with @therdplife and @thatgirlinmuddyboots it was wonderful contributing as a panelist to this galaxy of chefs, restaurateurs, culinary historians, food writers, researchers and bloggers on the year ahead from a culinary point of view. Trends and predictions on everything from dining in to dining out, beverages, desserts, health & lifestyle. Here’s an excerpt of our two bits on chocolates. @godrej_group @vikhrolicucina
Did you catch our Sunday Herald food column Salt & Spice for @deccanherald - this time we wrote about Red Hot Chili Pepper, tracing its origins and all the amazing local varieties used in Indian cuisine. By Anurag Mallick & Priya Ganapathy. Read all about the Scarlet Spice here: https://www.deccanherald.com/amp/sunday-herald/sh-top-stories/scarlet-spice-961182.html
Our latest piece for @cntravellerindia is not on travel or food but a home built with love. Part of a series called Home & Away that focuses on interesting second homes of interesting people, we showcase Bimal and Lavina Desai’s oasis near Hebbal called Zanti. Designed by Sri Lankan architect @channadas with artworks by @laki.senanayake read all about it in our story for Conde Nast. https://www.cntraveller.in/story/hebbal-bengaluru-design-geoffrey-bawa-bimal-lavina-desai-second-home/amp/
Feels like summer already... Time to increase your fluid and fruit intake. Like beer with notes of banana and guava! One swallow does not indeed a summer make so went bananas and glugged a few - Guava NIEPA, Witbier and Kolsch at 7 Rivers Brewing Company @tajmgroad! Pic courtesy @prarthnavohra with @spicygujaratan and @luthriaakshay