The quietly beautiful East Khasi Hills are just an indication of the magic that the rest of Meghalaya can weave, discover ANURAG MALLICK & PRIYA GANAPATHY

At Shillong, the air was crisp and cold with rock music riding the wind, wafting out of street cafés and mobile phones. The 3½ hour drive from the plains of Guwahati to the mountainous expanse of Meghalaya was mesmerizing. Every so often, we’d stop to click old churches, charming colonial bungalows and women in traditional jainsen and blouses. Near the Polo Ground we watched men wager at the age-old game of teer (archery) before digging into delicious Khasi cuisine of jadoh (red rice) and pork in Trattoria, a local joint.

Our base Rosaville was an elegant heritage home in the suburbs, adorned with antique furniture and sepia photos. Over tea and cookies our hostess Trupti Bauri delighted us with stories of burrasahibs and colonial history. The Don Bosco Museum was an eye-opener on the cultural uniqueness of the North East. We hopped over to the privately-owned Butterfly Museum at Riatsamthiah nearby. Run by the Wankhars, SK Sircar’s splendid one-man-collection showcased a brilliant array of butterflies, beetles and moths. The Rhino Heritage Museum, once an ammo store and dungeon for Japanese POWs in WWII, offered glimpses of the Indian Army’s achievements.

We drove 10km to reach Shyllong Peak for a fantastic view of the East Khasi countryside. Vendors selling farm produce along the road startled us with the size of radish – each, an arm’s length and as thick as a dictionary! About 15km north, the rippling Umiam Lake (Bara Pani) was the scenic setting for the plush Ri Kynjai Resort, a delicate fusion of luxury and tranquility. On a whim we took a bus to Smit, 17km south of Shillong, the cultural seat and royal abode of the Khyrim Syiemship. The thatched wood and bamboo Lyngdoh House was a study in traditional architecture while a massive granary stood as a nostalgic remnant of a prosperous past. In the quiet untouched sacred groves of Mawphlang, conservationist Tambor Lyngdoh shared insights about endemic flora and Khasi animist traditions.

Back in town, the quaint horseshoe-shaped gate of Tripura Castle drew us into the erstwhile summer retreat of Tripura’s Manikya dynasty. Built in the 1920s by Maharaj Bir Bikram, it was renovated in 2003 into the first heritage hotel in the North East! Swaddled in luxury, we mulled over our next move when a chance meeting with Deepak Laloo of Nakliar Tours led us to Meghalaya’s best kept secret. Mawlynnong. 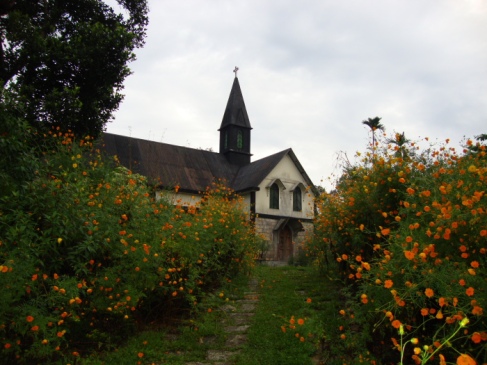 We rolled the word on our tongues like a toffee, savouring its musical lilt. Was it really Asia’s cleanest village? The winding journey from Shillong to Dawki would tell us. We sped past open meadows where grass glinted like polished gold in the slanting sun. By dusk, we reached the quaint village with neat rows of houses peeping over floral hedges. Bright orange cosmos bobbed in greeting as Henry Kharrymba led us beyond the Balang Presbyterian Church and a rickety bamboo bridge to the Mawlynnong Guest House & Machan. Like baboons in a leafy canopy, we chattered in the balcony, sipping black tea listening to the stream murmuring below.

By morning Mawlynnong looked like a fairytale. Gardens were awash with dewdrops and the village road was clean as a whistle. Was it coincidence that the fields were lush with broom grass or Phool Jhadu (Thysanolaena maxima), which spawned Mawlynnong’s broom-making industry? Each home had a woven basket for trash and everyone from the elderly to elfin children ensured that the town lived up to its tag ‘God’s Own Garden’.

Patting a boulder, Henry said “This hole is caused by rainwater. We call it ‘maw-lynnong’ in Khasi, meaning ‘stone with a cavity’ which gives the village its name.” Stones play a significant part in Khasi culture. Some homes had Maw-bin-nah, monolithic stones honouring their ancestors. Perched on a stone with the improbability of an elephant sitting on a lemon, the sacred Maw Ryngkew Sharatia or Balancing Rock was an ancient Khasi shrine that pre-dated the advent of Christianity.

The 2km walk to Riwai’s Jing Kieng Jri led to a setting reminiscent of the movie Avatar. A stunning natural bridge created by gnarled roots of the Ficus elastica tree swung over a rivulet. In Meghalaya’s remote hill tracts, the Living Root Bridges are centuries old modes of crossing streams. Nurtured by villagers who diligently twirl new wiry tendrils around older ones, the intricate hardy mesh can even be paved with stones!

Nearby Niriang Falls, a 300m cascade of the Wah Rymben River fell in a deep crystal pool fringed by swaying reeds. In this paradise where bright yellow butterflies flitted and mud-puddled around wet rocks, we surrendered to the therapeutic power of the tiered cataract splashing upon us. Not satisfied with the day’s adventures, Henry insisted we walk up to Mawlynnong’s Sky View! “Now??” we groaned. He nodded vigorously, urging us up a wobbly ladder. He gestured at the panorama of green rice fields and smiled, “All that…is Bangladesh.”

But no trip to Meghalaya would be complete without halting at Sohra or Cherrapunjee, one of the wettest places on planet earth. In this rain-soaked haven adrift with clouds, nature lovers come to track the Dark-rumped Swift diving along the misty gorges of the magnificent Nohkalikai and Nohsngithiang Falls and admire the limestone formations of Mawsmai and Mawsynram caves. Being the first British foothold in the North East, relics of Sohra’s imperial past lay scattered around the countryside – the David Scott Memorial (1831) and Nongsawlia Presbyterian Church built in 1846.

At Cherrapunjee Resort, our host Dennis Rayen revealed that bouldering and caving were gaining popularity. His passion for the place was evident. He had painstakingly collated meteorological data and decorated his walls with charts indicating how Mawsynram had dethroned Cherrapunjee as the world’s rainiest place!

A long trudge into Laitkynsew valley took us to an ancient double-decker root bridge. We dipped our feet in aquamarine pools rippling over cradles of rock, indulging in the pleasures of a natural fish spa. As we drove past the resort’s quirky signboard ‘Heads firmly in clouds, feet firmly on ground’ we wondered, if just a portion of the East Khasi Hills held such intrigue, imagine what magic the Garo and Jaintia hills could weave… 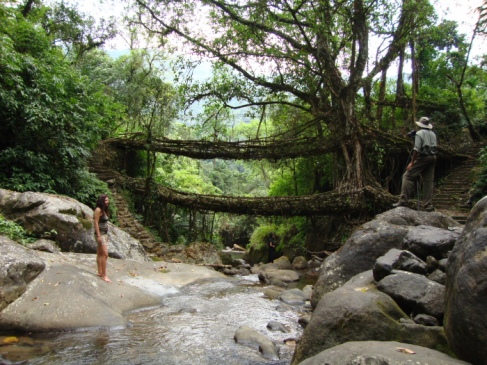 Authors: Anurag Mallick & Priya Ganapathy. This article was published on 18 May 2013 in Times Crest newspaper.

If Kolkata’s Hogg Market reminds you of a red brick colonial era railway station, there’s good reason for it. To avoid brushing shoulders with natives at the bazaars, British residents of Calcutta clamoured for an exclusive market. In 1871, a committee of the Calcutta Corporation, headed by Chairman Sir Stuart Hogg, purchased Lindsay Street, razed the old Fenwick's Bazar and commissioned Richard Roskell Bayne, an architect of the East Indian Railway Company, to design the Victorian Gothic market complex. Bayne was honoured with a Rs.1000 award, a princely sum in the 1870s. On 2 Dec 1903, the market was officially named Sir Stuart Hogg or SS Hogg Market - called Hogg Shaheber Bajaar by locals - but more famous by its old provisional nickname ‘New Market’.
When I first spotted the bizarre sculpture at Mecon Chowk in Ranchi - an ear trying to protect itself from two trumpet-shaped loudspeakers - I had no idea the trail would bring me to a cafeteria in Jamshedpur! Avinash and Ashwani Dugar run @la_gravitea in Circuit House Area. When they started 5 years ago, drinking coffee was fashionable but there weren’t too many takers for speciality tea. Inspired by their travels, they sourced the best teas from around the world and the gadgets to make them in.
“Mrityu ka bhay unko hai jinke karmo mein daag hai, Hum Mahakaal ke bhakt hain, hamare khoon mein bhi aag hai!” Jai Mahakaal - tea with attitude, M Road, Bistupur.
We all know Dhoni is a mega motor enthusiast who loves the wind in his hair… But one day he is in the hills at @meenabaghhomes with our friend @sanjayausta. The next instant we spot him on the Ranchi-Tata highway sharing a truck ride with Neymar trying to disguise himself in a Malkhan Singh t-shirt. One thing’s for sure - @mahi7781 has always maintained a low profile. It’s either Mahi way or the highway.
One of the older eateries on the Ranchi-Jamshedpur NH-33 highway is Nirmal Hotel at Rangamati, where travellers make a mandatory stop for samosa, kachori and alu chop, served with ghughni (smooth yellow pea curry), a staple in the east. They also make a mean gulab jamun with rabri. Two bus loads of travellers had stopped just before us so they ran out of samosa-kachoris. As they say, chop ho gayi!
A C’love story! Catch the Laung and short of this fascinating spice, in our Food & Drink column Salt & Pepper in this Sunday’s @deccanherald. By Anurag Mallick & Priya Ganapathy. Enjoy!